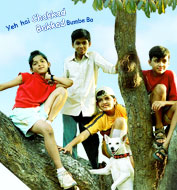 Ganesh, Yashwant, Dilip, Ulhas and Birbal the monkey and Sikandar the dog are spending their summer vacation playing and roaming in their quiet coastal town. They get curious when a mysterious city exporter, Don, come to town. Don is actually a smuggler and when Ganesh’s innocent school master father gets unwittingly trapped in his web, the six friends have to pull up their detective hats and work together to unearth the mystery. But are the children capable of dealing with the cunning of an experienced, tricky smuggler and would they be able to save Ganesh’s father in this exciting children’s thriller?

Director’s Biography: Sridhar Rangayan
Activist, writer and filmmaker Sridhar Rangayan studied in IIT, Bombay. He worked in different sectors before doing a film appreciation course at FTII. He then interned with Sai Paranjpye on the film ‘Papeeha’ and TV series ‘Hum Panchi Ek Chal Ke’ and with Dev Benegal on his film ‘English August’. He has been associated in the writing and direction of many TV series including Kalpana Lajmi’s ‘The Awakening’ for Doordarshan, ‘Rishtey’ and ‘Gubbare’ for Zee TV and ‘Kagaar’ for Sahara. ‘Yeh Hai Chakkad Bakkad Bumbe Bo’ was his first feature film. His other films include ‘Yours Emotionally’ and ’68 Pages’.