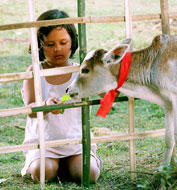 In the remote countryside of Assam and surrounded by hills, two families live a little outside the village in harmony with each other. 7 year old Tora, who studies in the village school and loves nature, belongs to one of the families and lives with her parents. Their neighbours also have three members. The peace of the two families is shattered when a conflict erupts over a piece of land and blows out of proportion. Where every attempt at resolution has failed, would Tora’s innocence be able to put an end to the dispute? Directed by internationally acclaimed filmmaker Jahnu Barua, the film has won the National Award for Best Children’s film.

Director’s Biography: Jahnu Barua
A direction alumnus from FTII, Jahnu Barua is one of India’s most globally acclaimed filmmakers. Most of his films have won awards and have been screened at international film festivals, including ‘Halodhia Charaye Baodhan Khai’, ‘Firingoti’, ‘Pokhi’ and ‘Maine Gandhi Ko Nahi Maara’. ‘Hkhagoroloi Bohudoor’ won him the National Award for Best director in 1995 and 15 international awards.