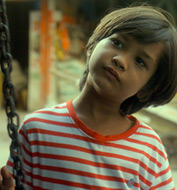 THE CAKE STORY is a heart warming and fun tale of, 6-year old Monu who is left to spend the day with his father on his birthday till his mother returns from Jabalpur in the evening. Although the mother has pre-booked and arranged for everything for the party there is still a lot that has to be done. Birthday decorations, co ordination with the caterers and most importantly to get the birthday cake from the bakery.
Monu’s day starts well with his father waking him up to a fun treasure hunt to find his birthday gift – an exciting origami book that he always wanted. But the excitement doesn’t last for long as the series of events that follow after, leave Monu disappointed and doubtful about his father handling the birthday party.
And the series of hilarious and unfortunate events start with the much awaited French Toast for the ‘Special birthday breakfast’ getting burnt. This is followed by Monu’s father’s car refusing to start and them ending up in a taxi whose driver refuses to take them to MG Road.
Sadly things do not stop here. After reaching MG Road Monu’s father realizes that he has forgotten the receipt at home and is unable to get through his wife’s phone either. And just when he thinks a Dial Service information Centre could help his phone battery dies.
However much to his father’s relief Monu tells him that he knows where the cake shop is. But the address that Monu tells his father is perhaps one of the most obscure addresses ever in the history of addresses if one is ever written. He tells him that the cake shop that they are looking for is near rocket nana’s house where the footpath has holes. And on being asked who is rocket nana and where is the footpath some more obscure answer follows.
And this highly obscure piece of information lead the father and son duo to a some really fun encounters as they set out on their search for Bombay Bakery where lies Monu’s Smiley Chocolate Cake.

Rukshana Tabassum is a film maker painter and trained classical dancer. She specialized in direction from FTII Pune and has been working in various capacities in the Film Industry in Mumbai.

She has shot digital ads for prestigious brands like Asian Paints Godrej and Orissa Tourism. Her short films ‘Adharottar’ and ‘Mission Sunday’ have been a part of many prestigious film festivals in India and abroad.

She loves travelling and has acute interest in Mythology and Culinary arts. Currently she lives in Mumbai and is working on her feature film for children which is based in Assam.