Secret Of The Island 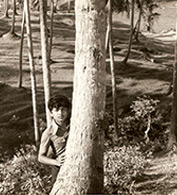 On a remote island in the Andamans, a meteorite lets out powerful energy. The tribals living on the island have no idea of its power but a vicious gang plans to steal it. Mr. Talukdar and his 13 year old nephew Santhu, who befriends the tribals, discover the meteor and take it with them on a ship to Calcutta. The criminals secretly follow the two and it is an alert Santhu who detects their presence. It is up to him to not just warn his uncle but also help him foil the plans of the criminals to steal the meteor and harness its energy for evil.

Considered one of the most uncompromising filmmaker outside the orbit of the Parallel Cinema movement, Tapan Sinha was arguably one of India’s most creative directors. After beginning his film career as a sound engineer in Calcutta’s New Theatre, he worked at the Pinewood Studios in London for two years. Returning to India he turned to direction, making some of the country’s most memorable films including ‘Kabuliwala’, ‘Khudito Pashan’, ‘Atithi’ etc. A man who rooted for creativity and adapted different styles, Tapan Sinha made films in Bangla, Hindi and Oriya. He died in 2009.