Pehle Aap (After You) 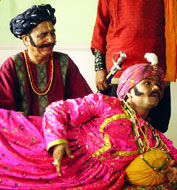 The king of Meethapur has a witty court jester who is insecure about his position in life. When he hears of a famous fortune teller, he conceives a plan where the king is told that he would die two hours after his jester. The scared king now ensures that the jester is well taken care of. Comfortable in his position, the jester gets greedy and begins making absurd demands, confident that they would be met. Baffled at first, the king finally sees through the jester’s game and hatches his own sweet, funny revenge. This rollicking fun ride has lyrics by Gulzar and music by Bhaskar Chandavarkar.

Director’s Biography: Virendra Saini
Director & cinematographer, Virendra Saini, graduated from FTII with a diploma in cinematography in 1976. He has been intimately and consistently connected with the New Cinema Movement in India, working for both feature films and full-length documentaries with several major directors including Mani Kaul, Saeed Mirza, Sai Paranjpye, Kundan Shah, Vinod Chopra and Bhimsain. In 1990 he won the National award for Best Cinematography for the film, ‘Salim Langde Pe Mat Ro’.In 1999 he directed his first feature film, ‘Kabhi Pass Kabhi Fail’ production by CFSI which won the National Award, for the Best Children’s Film.