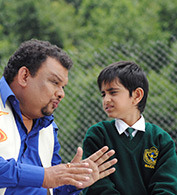 Pappu, a young boy from a lower middle class family living in scenic manali, felt fortunate enough to get admitted in the prestigious school of his town but his excitement proved to be short-lived as he started having adjustment issues in his new school. His rich classmates made fun of his humble background and looked down upon the innovative toys and gadgets that he made from waste with the help of his jobless engineer father, the child continued to suffer silently until one day when he came face to face with a genie in his tree house. Genie had indeed some magical powers at his disposal, he feels that all his troubles are going to be over now but the genie expresses his inability saying magic is not something permanent and pappu has to work hard.

To encourage a disappointed Pappu, the genie tells him that there are so many ways to become popular and there are all types success. of heroes in this world. If you look around you will find a way but first look within. Ask yourself what you are good at… What special skills you possess and then think how you can use them to help people.
Pappukipugdandi is adventurous, magical and logical journey that thrills as well as teaches some invaluable lessons to make one realize that there are no shortcuts to happiness and he identifies his own strength