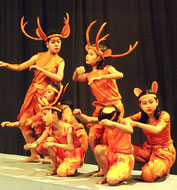 Young Paari and Tolen are close friends. The two live near a national park and roam around the park observing wild birds and the Sangai – an endangered deer specie. They help a research scholar study the Sangai. When Tolen’s father is transferred, Paari feels lonely and loses interest in watching birds and animals. One day however, after helping a wounded bird, he feels happy. This rekindles his love for nature. Once trying to protect a Sangai from a hunter’s trap, he gets trapped himself and loses consciousness. Directed by globally awarded Manipuri director, Aribam Syam Sharma, Paari tries to instill the love of nature in young kids.

Director’s Biography: Aribam Syam Sharma
One of India’s most globally acclaimed filmmaker, director and composer Aribam Syam Sharma hails from the north-eastern, hilly state of Manipur. Recipient of the V. Shantaram Award for Best Direction (1997), he has won several international and 10 National Awards, for both feature and non-feature films His film ‘Imagee Ningthem’ won the Grand Prix at the Festival des Troi Continents at Nantes, France in 1982. Another film, Ishanou (1991) was selected for the section Un Certain Regard in the 44th Cannes film festival.