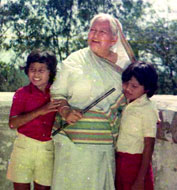 A king looking for the map of a hidden treasure finds it in the back of a framed picture in grandmothers’ home. Realizing that some unscrupulous people are also in search of the map, he tears it into two, giving one to her for safekeeping. She hides it in her old gramophone box, unaware that a dacoit is watching her. She gets kidnapped and her grandsons try to find her even as the king’s wicked cousin hires a magician to find the location of the map. Will grandmother be rescued and does the treasure fall in the wrong hands? This magical ride through a wondrous land won multiple awards at the Moscow Film Festival, 1981.

Director’s Biography: Parvati Menon
After completing a degree in Law, Parvati Menon decided to make her career in films instead and became one of the first students at the newly instituted FTII in the 1960s. A prolific director, Parvati’s main concern in cinema has been children. She has taught, researched and written about cinema, while also writing, directing and producing many feature, documentary and short films. She has served as jury for many film festivals worldwide.