(Come! Lets US Be Friends) 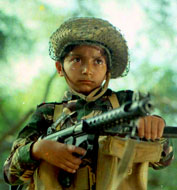 Nine year old Gul Hasan lives in the desert of Rann of Kutch. Its extreme variations of temperature, absence of water, open sandy plains with no vegetation, its sand storms and cracked and parched earth, provide the inert background to Gul’s dreams, hopes and aspirations. The natural environment along with urban and modern influences and happenings has a great impact on his mind, which become the take-off point for his fantasies. Gul’s journery slips from reality to fantasy to reality. The film has won many awards globally, including Best Children’s Film at the 40th National Film Awards in 1993.

Director’s Biography: Gopi Desai
Gopi Desai studied acting in both FTII and the NSD (National School of Drama). She has made programs for women and children at the Indian Space Research Organisation (ISRO). She is a member of the Sangeet Natak Academy and has acted in many plays. She has made several documentaries and has assisted many directors like Jahnu Barua, Ketan Mehta, Mahesh Bhatt and Ramesh Sippy among others. ‘Mujhse Dosti Karoge?’ is her debut feature.