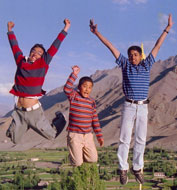 Two kids, Vikram and Aditya, accompanied by their grandfather Chako, are enjoying a vacation amidst the sterling beauty of Ladakh. Their companion in fun is 10 year old Tsering, the cook’s assistant. Things take an ugly turn when a few goons try to kidnap Tsering when grandpa is away. Vikram and Aditya manage to save him, only to be accosted by the ring leader Akira. They hide Tsering in the village and manage to escape with the help of a tourist couple. Later when they return with grandpa to fetch Tsering, they discover that he has been kidnapped. Who are the goons and why are they trying to kidnap a cook’s assistant?

Director’s Biography: Vinod Ganatra
Vinod Ganatra has been active in the film industry since 1983. While working as an independent editor with television and the Indian Space Research Organisation, he launched his own production company, Movieman. He has several awards to his credit. Widely traveled, he has also served on juries of several international film festivals and selection panels.