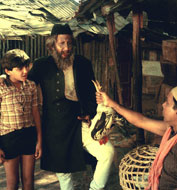 When a village boy goes to the market to buy a rooster he is cheated by the shopkeeper who hands him a puppy instead. Later when all pleas to correct this cheating fall on deaf ears, the boy and his grand mother decide to expose the swindler on their own, not realizing that he is an experienced hand. Expectedly, their plans misfire. A confused constable adds to their problem. But unwilling to give up, the two gather their wits to catch the cheat. In a funny, delightful way the film tells us that everyone, even kids and old ones, should fight injustice even when the odds are heavily stacked against them.

Director’s Biography: Parvati Menon
After completing a degree in Law, Parvati Menon decided to make her career in films instead and became one of the first students at the newly instituted FTII in the 1960s. A prolific director, Parvati’s main concern in cinema has been children. She has taught, researched and written about cinema, while also writing, directing and producing many feature, documentary and short films. She has served as jury for many film festivals worldwide.