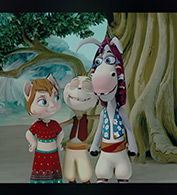 Krish the cat, Trish the monkey and Baltiboy the donkey – three lovable storytellers take you on a colourful and exotic journey of Indian folktales to Rajasthan, Kerala and Punjab, while you enjoy their antics that lighten up the screen in this wonderfully crafted animation.

Munjal Shroff and Tilak Shetty founded an animation studio, Graphiti, in 1995. They have developed and produced shows such as J Bole Toh Jadoo with Nickelodeon and are currently developing an animated feature with Turner. Tilak Shetty became an Animation Director after co-authoring eight books on computer programming