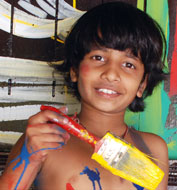 Keshu lost his ability to talk and hear along with his mother when he was born. He was raised by his maternal uncle. Being quite mischievous, there was never ending complaints from the villagers. His uncle had no choice but to punish him, but to no avail. The only person who Keshu could reach out to was his distant relative and the maid of the house, Devu. This was the time when Shalini, a teacher transferred to that village started living with the family. Keshu did not spare her too from his mischief, but she did not complain to anyone, and instead started liking him. He reciprocated the affection shown to him and there was a gradual change in his behaviour. She encouraged him to take up drawing and even convinced his uncle to put him in a special school.When he wins an international award for his painting, ‘The elephant and the Mahout’, he becomes the darling of the whole village. The end of the happy chapter came in the form of a letter to Shalini having her marriage arranged. Her return was a torment to him, his family as well as Shalini. Whenever the train in which Shalini left, passed by, he made it a habit to wait at the railway station. The sound of the train tearing away the darkness tore his heart as well. He realises the folly of hoping for a return of someone lets his uncle take him back to the world of colours and lines.

Director’s Biography: Sivan
Sivan began his illustrious career as a photo – journalist, contributing to magazines such as Newsweek, Life and Span. He learnt the rudiments of film making as a staffer with the USIS. He is credited with making the first 16 mm film in India, “Labour Week, in 1953.
From 1972 onwards, Sivan has made a series of films that have won him awards and recognition. Sivan founded the film complex “Sivan Studios” in Kerala, which has extended to an art gallery for emerging artistes and photographers. “Swapnam” made in 1972 was his first feature film, which won 4 state awards and his second feature “Yogum” was as successful. His earlier children’s film “Abhayam” had won Silver Elephant Award at the International Children’s Film Festival, Trivandrm in 1991.