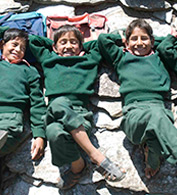 Makar and Kamru live in a small village in Garhwal. All the men in the village work in the city. Makar’s friends’ fathers visit the village regularly, with gifts for the family. But Makar and Kamru have not seen their father for 5 years. When he does come home, Makar and Kamru find that not only has he not brought them any gifts, he scolds them regularly, and disciplines them too much. Makar’s friends, Bupi and Pusu convince him that his father may be an imposter. They plan to get rid of their father, through a magic potion from a witch in the forest, Pagli Dadi. But instead they meet Pagli Dadi’s granddaughter, Ghungra who takes them for a merry ride.

Batul Mukhtiar is a filmmaker, an alumni of the Film & Television Institute of India, Pune. She lives in Mumbai.

She writes her own scripts. Apart from several documentary shorts, she has directed a documentary feature 150 SECONDS AGO which travelled to many prestigious festivals across the world. In 2007, she directed a children’s feature film, LILKEE for the Children’s Film Society, India.

She also works as an associate producer and a line producer for international documentary crews shooting in India.