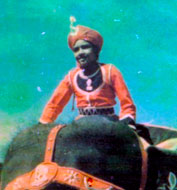 Kala Parvat is a giant elephant and the leader of his herd. Kala Parvat, his son Toofan and the herd live contentedly in the forest. After a draught, thirst and hunger force them to leave the forest. A forest officer catches the herd and tames them – all except Kala Parvat. He finally gives in to the love and caring of the officer’s young son and the two become good friends. One day Toofan goes mad and the only one who can save the villagers is his father Kala Parvat. A co-production between India and the Soviet Union the film jointly directed by M S Sathyu and Alexander Zagurdi has the expertise of a predominantly Russian crew, supported by a second Indian unit.

Co- Production between India and the Soviet union, in which the main crew was predominantly Russian supported by an Indian second unit.

Director’s Biography: M S Sathyu & Alexander Zagurdi
M.S. Sathyu, an internationally renowned filmmaker and theatre director, moved to Bombay from Mysore in 1952. He did a variety of jobs including animation, documentary, TV films, TV serials, designing and directing plays and even wrote a script for a ballet before making ‘Garm Hava’ in 1974, that became one of the best films on the partition and won him a Golden Palm nomination at the Cannes Film Festival including several awards in India. He has since made films like ‘Bara’ and ‘Kanneshwara Rama’ while also directing many successful plays. ‘Kala Parvat’ is an Indo-Russian joint collaboration with Alexander Zagurdi.