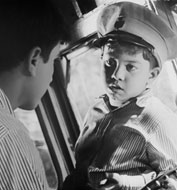 Ashok, whose father is the keeper at the lighthouse, decides to take his cousin Priti there by a yacht. Chandan, the driver of the yacht, is a reckless youth. He tries to show off by taking needless risks that puts the life of the three kids in danger. To make matters worse, a sudden thunder storm traps the yacht. All hope seems lost till Ashoka’s father with great risk, manages to save them. But is this experience enough to teach a reckless Chandan the necessary lesson of caution?

Director’s Biography: Kedar Sharma
Director, producer, writer and lyricist Kedar Sharma was an early doyen of Hindi cinema. He slogged in Calcutta as a still cinema photographer, set painter and bit-part actor before writing the dialogues and lyrics for the Hindi adaptation of ‘Devdas’. He then directed the smash hits ‘Chitralekha’, ‘Neel Kamal’, ‘Bawre Nain’ and ‘Jogan’ and is credited for starting the careers of some of Hindi cinema’s great actors like Geeta Bali, Madhubala and Raj Kapoor. At the request of Jawaharlal Nehru, he joined CFSI and made many feature, short and documentary films.