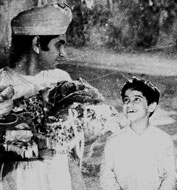 Shyam and Soni live with their mother in the outskirts of a village. In return for a good deed, the brother and sister pair is presented with a magical conch that grants wishes. With its help the two kids assist a king to unravel and foil a plot against him and his kingdom. Directed by Sai Paranjape, this Best Child Actress winning film at the Moscow Film Festival drives home the message that not only does good triumph over evil in the end, but no good deed goes unrewarded.

Director’s Biography: Sai Paranjpye
Writer, director and playwright Sai Paranjpye is one of India’s most creative minds. Beginning as an announcer in radio, she has made serials, documentaries, written and directed films, written and directed theatre in Hindi, Marathi and English and also written many books. Her first feature film ‘Sparsh’ in 1980 won three Filmfare and one National Award. Her comedies ‘Chashme Badoor’ (1981) and ‘Katha’ (1982) are today considered classics of Indian comedy. In the 1970s she twice served as the Chairperson of CFSI and over the decades, has made four films for them including the award winning ‘Jadoo Ka Shankh’ and ‘Sikandar’.