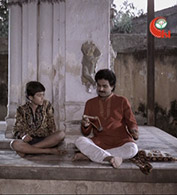 The festive mood at Ratawlal Babu’s house is disrupted by the arrival of a stranger, Gandharva Kumar. The handsome young man captivates the grandchildren, Habul and Tinni, with his magic tricks. When confronted by Ratawlal Babu, the stranger reveals a long forgotten secret and claims to be the heir to the family property. This leaves everyone in the house forlorn. But is he indeed the actual heir or is it just another one of his magic tricks? Hire Ki Angti is the directorial debut of now famous Bengali director Rituporno Ghosh and also stars Moon Moon Sen among others.

One of India’s most prolific young directors, Rituparna Ghosh first worked with his father, a documentary filmmaker, as a teenager. Despite a degree in economics, he entered the advertising world early on making TV and cinema commercials for companies, products and public service. He debuted in cinema with the CFSI film ‘Hirer Angthi’ in 1992. Since then he has made films in Bengali, Hindi and English at an average of almost one film a year and has won many national and international awards. His notable films include ‘Chokher Bali’, ‘Antarmahal’, ‘Raincoat’ and the most recent ‘Noukadubi’.