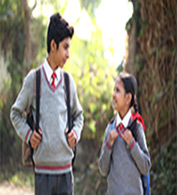 Vicky and Kaku the brother sister duo are two of a five-member family living a simple life in a small hilly town of Pragpur. Pradeep, their father, runs a small shop and aims to get a licence to become a tourist guide to improve their income and Karuna, their mother contributes financially by taking tutions. The senior most member of the family is Dadu, Pradeep’s father, who retired as a school teacher, and serves in the community center giving homeopathy treatment to people for free. The parents educate their children in the only English medium school available in the region and several kids from neighbouring villages come there too. It is a loving, homely environment, with its own share of discipline, caring and fun and innocence.

One day Vicky’s classmate Sachin exposes them to a whiff of changing culture seeping from the city and introduces them to Happy Mother’s Day….an event that is the only way to express their true love for their mother.

The duo with their guileless smile and an unwritten promise in their eyes set on a journey to Mother’s Day.…Will they survive… will their innocence survive?

Anjuli lives in Mumbai and is now recognized as one of the promising cinematographers and emerging director in India. Anjuli recently launched her production house ‘Sanjeevani Films,’ with its first feature film “Neeldhara.”

She went on to direct `Happy Mother’s Day’ in collaboration with CFSI the Film was the inaugural film 19th edition of India International Children’s Film Festival in Hyderabad.