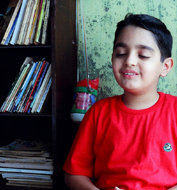 Nine year old Kintoo’s friend is an elderly bookseller-cum-restorer, Baba. One day Baba tells Kintoo about his grandfather’s library and his favourite book among them all – Arabian Nights – the book whose story never ends. Kintoo is fascinated. When he visits his uncle’s house in the village, he discovers a tattered copy of Arabian Nights, matching Baba’s description. Kintoo now aspires to take the book to Baba. However this seems as impossible a task as an elephant trying to lay an egg. Would Kintoo be able to achieve the impossible, in this delightful film written by Shanta Gokhale and directed by Arun Khopkar.

Director’s Biography: Arun Khopkar
Writer, director, producer, film scholar, teacher and actor, Arun Khopkar is an FTII alumnus. He has made many short and documentary film, a few feature films, has extensively lectured on aesthetics and cinema and written books on cinema. His films – both feature and documentary – have won him many awards nationally and globally and have also travelled to festivals across the world. Many of his films are on the music, dance, painting, architecture and literary traditions of India. He is also a prolific writer on cinema and its history and teacher of cinema aesthetics.