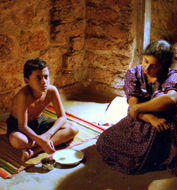 Monayi studies in an expensive English medium school. After his fathers death in an accident he is forced to join a regional language school due to lack of funds. Though he hates it at first, a dedicated and kind teacher turns him around. After this teacher loses his job, a dejected Monayi leaves school and joins a farm and learns work while earning money. When the insurance money fromm his dad’s accident finally arrives, Monayi’s mother wants to send him back to the English school. Does Monayi, now changed, agree? Gharaksharangal won the National Award for the Best Children’s Film for its simple lesson that it is not the language of education that is important, but the patience and kindness of the teacher imparting it.

Director’s Biography: Salim Padiyath
Born in 1958 in Kodungallur, Kerala, Salim Padiyath did his graduation in commerce before beginning his career in cinema. He has worked as an associate director with many prominent film directors including Kamal and M.T. Vasudevan Nair for about 25 films. He directed a documentary Shre-e-Malabar on Freedom fighter Mohamed Abdur Rahiman. He has also directed short films and ad films. Gharaksharangal, written and directed all by Padiyath, was his debut feature that won him the National Award for the Best Children’s Film in 2000.