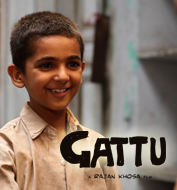 In this town, the sky is full of kites, and all the kids are obsessed with kite-flying. The kite, Kali, rules the skies. No one knows who flies Kali. No one can defeat Kali. An illiterate street urchin takes up the challenge. With neither money nor education on his side, he sets out for his goal. Dreams aren’t impossible when the desire is strong.

Rajan Khosa came into the limelight with his feature film Dance Of The Wind which premiered at Venice and won at Rotterdam, Chicago, London, Nantes etc. His shorts include Wisdom Tree and Flower Girl. An alumnus of Royal College of Arts, London, FTII, and NID, Ahmedabad, he is a voting member of BAFTA.