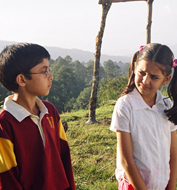 Eleven year old Foto has a strong imagination and lives in his own world of fantasy. Other kids consider him strange since he does not interact with them. One day, a film unit comes to his hilly town to shoot. Foto is mesmerized to see the magicians create rain and lightening, image and colour, and sound and music at their will. It is as if his fantasy is the reality of these magicians as a new world full of thrills, adventure and discovery opens up for him. But will he be able to reconcile his world of imagination with this real fantasy? The film won the Best Children’s Film award at the National Film Awards, 2007

Director’s Biography: Virendra Saini
Director & cinematographer, Virendra Saini, graduated from FTII with a diploma in cinematography in 1976. He has been intimately and consistently connected with the New Cinema Movement in India, working for both feature films and full-length documentaries with several major directors including Mani Kaul, Saeed Mirza, Sai Paranjpye, Kundan Shah, Vinod Chopra and Bhimsain. In 1990 he won the National award for Best Cinematography for the film, ‘Salim Langde Pe Mat Ro’.
In 1999 he directed his first feature film, ‘Kabhi Pass Kabhi Fail’ production by CFSI which won the National Award, for the Best Children’s Film.