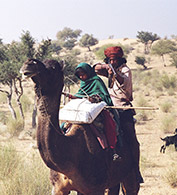 Choti belongs to a farming community in a semi-desert region of Rajasthan where her people are known for conserving the environment, especially the deer. One day she notices a man from a community of hunters who depend on hunting deer as their source of livelihood, trying to shoot a deer. Chhoti rescues the deer only to cause a flashpoint between the two divergent communities. This short film sensitively portrays the moral dilemma caused by a clash between different ways of life and the need for protecting the environment. It won the Swarna Kamal for Best Short Fiction Film at the 54th National Film Awards in 2006.

A graduate of FTII, Ramesh worked with Indian Space Research organization (ISRO) on its educational television project. He has since worked on numerous documentaries as editor, director, producer and script writer. He is also associated with numerous NGOs working in rural areas. ‘Ek Adesh…’ is his first film