Crow For All Seasons 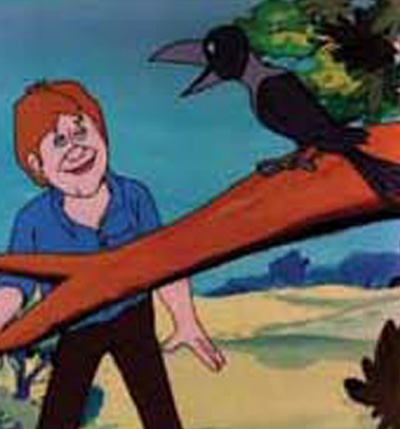 A colonel living with a snappy wife, irresponsible son, naughty nephew, a no good cook and an old dog is targeted by Teji – the crow. Teji picks good food made for the family, who retaliates but to no avail. Once, the colonel’s son shoots dead a crow. The crow community declares war on the family who are forced to move out. Initially happy at this victory, Teji soon misses the family and sets out in their search.

Director’s Biography: Ashit Ranjan Sen
After specializing in design and graphics, A.R.Sen took advanced training in Animation in Czechoslovakia and the National Film Board of Canada. Starting his career in advertising, Sen quickly switched to film animation. He worked with Film Division for twelve years, where as Chief Animator he trained several talented artists, while also scripting, directing and animating his own award winning films. In 1974, Sen joined FTII, Pune heading its Design Department. A prolific painter, he has also held shows of his paintings in different parts of India.