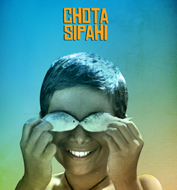 Joze is a young Goan boy growing up during the freedom movement of the state in the 60s. Though young and thus expected to remain ignorant of the political winds brewing all over, he becomes acutely aware of the grave injustice everywhere and the sacrifice made by those around him. This instills in him a sense of responsibility that becomes instrumental in saving many lives during a crucial military operation. The film won the child actor the award for the Best Child Artist at the 52nd National Film Awards in 2005.

Director’s Biography: Jayshree Kanal & A S Kanal
Jayashree Kanal:
Jayashree debuted as a director with the film ‘Kaat Kaat Kad Kaddu’ for CFSI and followed it up by co-directing ‘Chota Sipahi’. Besides writing and directing TV programs, she also teaches direction and acting at FTII.

A.S.Kanal:
A graduate of FTII, A S Kanal has worked as a cinematographer for many ads, films, documentaries and TV programmes. He has also worked as a teacher of cinematography at FTII. Currently he is working as an independent producer and trainer