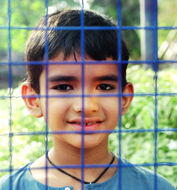 After the Gujarat earthquake of 2001, 6 eminent Indian filmmakers got together to contribute individual segments to ‘Chirayu’. This film thus becomes a boquet of six individual stories designed to reach out to the children of Gujarat traumatized by the earthquake and put a smile back on their faces. The directors who have contributed segments are Virendra Saini, A K Bir, Shyam Benegal, Santosh Sivan, Aziz Mirza and Sai Paranjpye. An embellishment to their efforts is provided by the renowned animator Ram Mohan.

Director’s Biography: Shyam Benegal, Santosh Sivan, Sai Paranjpye, Virendra Saini, Aziz Mirza, A K Bir
Shyam Benegal, one of India’s most renowned filmmakers, is a pioneer of the New Indian Cinema movement of the 70s. Santosh Sivan is the country’s most renowned and globally awarded cinematographer who has also directed many films. A multitalented persona, Sai Paranjpye has many books, films, documentaries and plays to her name. Virendra Saini is an award winning cinematographer and director who has worked with some of the most creative filmmakers of the country. Aziz Mirza is a well known commercial filmmaker of India who has made popular films like ‘Raju Ban Gaya Gentleman’, ‘Yes Boss’ and ‘Chalte Chalte’. A K Bir is a award winning cinematographer and children’s film director.