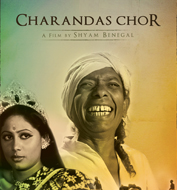 Charandas the thief, after swearing to always tell the truth is adamant in his resolve to follow it. Before committing any theft he tells his victims of his true motives. He scolds his loyal partner Buddhu whenever he lies. In the course of his profession as a thief, he encounters rulers and artists, businessmen and religious gurus, each of whom ironically pale before the honesty of Charandas – the thief. Told with rare Chaplinsque humour and simplicity, this masterpiece written by the legendary Habib Tanvir and Shama Zaidi and directed by auteur Shyam Benegal, is a laugh-a-riot fun for the young and old alike and tacitly satirizes society by pitting an honest thief against dishonest citizens.

Director’s Biography: Shyam Benegal
One of India’s most prolific filmmakers, Shyam Benegal’s quartet, beginning with his debut Ankur (1973), then Nishant (1975), Manthan (1976) and Bhumika (1977), is attributed for the success of the New Indian Cinema wave in the 70s. He also made the landmark TV series ‘Bharat Ek Khoj’ and launched or sustained the careers of some of India’s greatest actors like Shabana Azmi, Anant Nag, Om Puri and Nasseruddin Shah. He has won awards nationally and globally including Padma Shri, Padma Bhushan and the Dadasaheb Phalke Award. His films have won the National Award for Best Hindi Feature Film a record seven times. Benegal continues to make films that are both critical and commercial successes