Every year on August 29, India celebrates National Sports Day. The day is celebrated to honour the legendary hockey player Major Dhyan Chand Singh. The day is observed to spread awareness on the importance of sports and daily activities in everyone’s life.

THE GOAL which is bestowed with ‘Best Children’s Film’ during ‘National Film Award’ – 2000 was screened at multiple locations for the infotainment of children at Mrinaljyoti Rehabilitation Centre, Duliajan, Assam, while taking all necessary steps to prevent the spread of Covid19.

Animation song ‘Vaishnav Jan To’ based on Mahatma Gandhiji and CFSI film ‘The Story of Kachrapur’ made by Little Director on ‘Cleanliness’ were also screened before screening of film ‘The Goal’.

Synopsis of film THE GOAL –

An ace soccer coach Anupam finds great talent in the shabby Manu and gives him a chance to play in his team. Manu returns this confidence by working hard and proving his talent for the game. When Coach Anupam decides to put him in the final team, the other team members resist as Manu belongs to a lower caste and his father is in prison for theft. Not wanting to let such a talent die, Anupam puts Manu in a competitive soccer team. Will Manu be able to prove his worth? Can talent overcome social prejudice and caste differences? 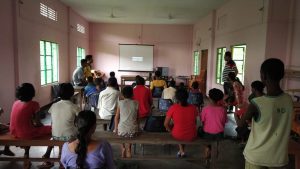