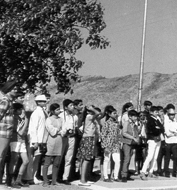 One of the most influential men of Indian Cinema who wrote such hits as Awara and Shri 420 for Raj Kapoor and introduced Amitabh Bachchan, K A Abbas, takes 32 kids from different parts of the country on a national tour. They travel from Srinagar in North India to the nation’s Southern-most tip – Kanyakumari. The kids see and experience few glimpses of this vast nation and its people. The kids thus get to see the unity in diversity of India, its people and its children.

Director’s Biography: K A Abbas
Director, novelist, screenwriter, journalist and columnist Khwaja Ahmad Abbas was one of the most influential but underrated man of Indian cinema. An unparalleled screenwriter, he wrote ‘Neecha Nagar’ which in 1946 won the highest prize at the first ever Cannes Film Festival. He also wrote Raj Kapoor’s biggest hits – ‘Awaara’, ‘Shri 420’, ‘Mera Naam Joker’ and ‘Bobby’. A director par excellence, he made hits such as ‘Dharti Ke Lal’, ‘Pardesi’ and ‘Saat Hindustani’ and launched the careers of many popular actors, including Amitabh Bachchan. He died in 1987