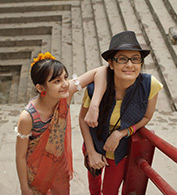 According to the legends; Banaras was found by Lord Shiva and hence is known as a holy religious site. Banaras has too many stories to hide. Here we discover some mysteries solved by our young, aspiring detective, Miss Rhea Sharma. Rhea Sharma is a school student who has the zeal to solve mysteries and unsolved cases. Our young detective is not alone. She has an own small crew for solving cases. Mini who has a sharp mind and Golu admires Rhea and wants to become like her.

Rhea is known for her detective skill all around the city and her school. Her headmistress is quite impressed with her observation skills and intelligence for solving cases within minutes. But this time, the case is not as easy as it seems. Pandit ji, who has been given the responsibility to safeguard Saint Tulsidas’s Holy wooden footwear, has lost his peace as the holy footwear gets stolen. Pandit ji doesn’t want to involve police as the matter going out would spoil the name of the trust. Hence he hands over the case to our young detective Rhea, who plays a wonderful mind game in catching the real thief amongst the politician, antique dealers, thugs and frauds and brings the holy footwear back to where it belongs.

Pankuj Parashar is a director of Bollywood as well as T.V serials. He has also produced and directed over 400 comercials. As a film Director his most successful story is Chaalbaaz. Remake of Hema Malini’s Seeta aur Geeta. Jalwa is a hit film by Pankuj Parashar. As a television director, detective series Karamchand is his most noted work. Pankuj is a gold medalist of FTII Pune. He took a diploma in Direction and screenplay writing. In 1980, his documentary film Malfunction won his Filmfare award for the best documentary. His Debut in Bollywood was by the film – Ab Aayega Mazaa.