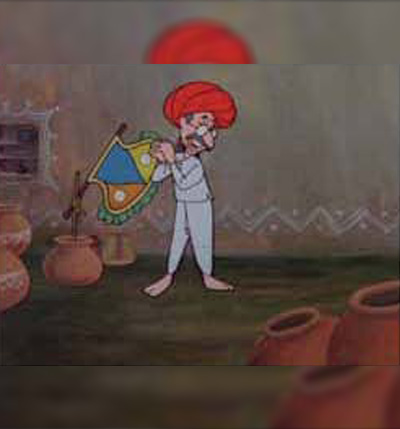 Ballu Shah, a born miser, gets trapped in a tree. He promises god to feed a Brahmin in lieu of his life. To fulfill his promise, he chooses Kankidas, a poor Brahmin who he thinks has a poor appetite. He instructs his wife to give him a meal and goes out to run an errand. Seizing the opportunity, Kankidas tricks the wife into making food for 10 men. He also takes four gold coins from her. A furious Ballu Shah rushes to the Brahmins house to teach him a lesson. Anticipating this, Kankidas has a plan ready to fool Ballu Shah further.

Director’s Biography: Rajesh Agarwal
A graduate of FTII, Rajesh Agarwal joined CFSI in 1964. During his eleven year tenure here, he worked with eminent directors like K.A.Abbas, Phani Mazumdar and Ram Gobale among others. After this, since 1975 he began work as a freelance editor, editing many features, documentaries and animated films.After assisting in the making of several TV serials and telefilms, he directing his own TV series and films