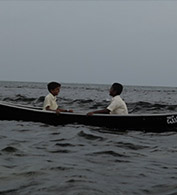 Putta and Basu, nine year olds, are unlikely friends in a small fishing village in coastal Karnataka. Basu’s widowed mother, plans to marry a distant relative brings unrest in Basu’s life. When Basu fails in a class test, he forges her signature on the report card only to be caught by the teacher! Putta’s unusual hobby is to carve models out of rubber pieces for which he steals money from home. But on that day, he is caught by his mother and is reprimanded severely. Basu’s grandma’s story comes as a solution. The story says that whoever goes to the distant island in the sea and leaves something behind for Panjurli (aspirit) will see his wishes come true! Putta and Basu decide to venture into the dangerous sea in their small wooden dinghy.

After working in the IT industry for about 4 years and then completing a film making program at NYFA, Los Angeles, Alegalu is the debut feature film of director Prithvi Konanur.

His first short film ‘A Conditional Truce’, shot in Sri Lanka, was well received in the international film festival circuit.