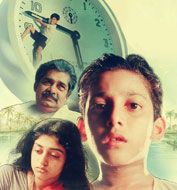 Vinu is artistic and irresistibly drawn towards nature. He finds solace in the memories of his grandfathers’ village. His parents, pressure him to study hard and score good marks. Vinu thus finds himself a prisoner to the clock as he struggles to finish his daily chores on time. One day, unable to take the pressure, he decides to run away and go to his grandfather’s village. In the course of his journey he meets strange people and encounters the world of grownups that is in direct conflict with nature. In a world where parents unduly pressure their children to do things against their own volition, the film tries to give a simple message that often it is better to nurture the real talents of kids rather than force them to do something against their true natures. It has won many national and international awards.

Director’s Biography: Sivan
Sivan began his career as a photo-journalist contributing to reputed magazines such as Newsweek, Life and Span. He learnt filmmaking while working for USIS. In 1953 he made ‘Labour Week’, hailed as the first Indian film shot on 16mm. He made his first feature film 1972 with ‘Swapnam’ that won four state awards. Since then he has made many feature and documentary films that have won him laurels. He is also the founder of the film complex Sivan Studios in Kerala, which has extended into an art gallery for emerging artists and photographers.