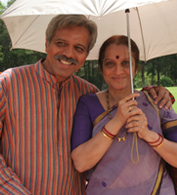 Akshay and Tanvi live in the city. Their parents are so engrossed in their own lives and careers that they don’t have time for the kids. The lonely children don’t know where to clarify their doubts. One day they come across an elderly couple who not only have the time to listen to them, but also understand their dilemmas. The kids want to take this couple home, but social barriers and rules don’t seem to allow that. The kids however refuse to give up so easily? ‘Aaji-Aajoba’ is a take on modern life where busy parents don’t have time to fulfill the emotional needs of their children. It calls for an urgent need to build a bridge of warmth, caring and understanding between the world of adults and innocent children.

Director’s Biography: Milind Ganesh Dastane
Writer, director actor and producer Milind Ganesh Dastane is associated with both Hindi and Marathi films. He has been part of many commercial films, television series and documentaries with many renowned directors in both the languages. ‘Aaji Ajoba’ is Milind’s first film as a director and co-producer.